HALL ROAD RANGERS U19s v NORTH FERRIBY UNITED U19s
Thursday 5th September 2013
When planning this trip to the UK I thought it would be good to watch football at different levels. UK is known for being poor in the developmental ages especially outside the top professional clubs. The first Youth game I went to see was this Under 19s fixture.
The setting was a ground called Dene Park on the outside of Hull at a place called Dunswell. The ground had one small stand behind one of the goals. The weather was clear but the air was just starting to get a bit of bite to it. A small group of parents present in the stand alongside with hot cup of tea ready for the game.

Above Photo of ground

We sat wondering with great interest what type of football we would witness, once the first ball was kicked. Within seconds it was clear, high pressing, a high back line and the shouting of press from the bench and the team. The ball was being moved around at great speed, but lacked great quality. The passing quality and the support around the ball was very poor and build up was frantic and lacked any thought. Some good players were present but the brand of football would mean a great imagination would be required to see these players progress to the next level.

Above the team formations

It looked clear that Hall Road Rangers had an older team and a more physical team. North Ferriby United looked like a younger team and they seemed to try and play a little more than Hall Road Rangers. I would though make it clear that neither team attempted to play any football that would fit into any decent developmental model.

When we look at the playing philosophy of both teams and how they build up its seemed impossible to see what had been worked on in training. Both GKs went long with 90% of the goal kicks going to a battle in the middle of the park. On a few occasions both teams went short to rather 3 or 4 or sometimes to 6 dropping in. The next pass from these players was long into the channels for a runner or long to the striker to drop off.

Above a build pattern when the GK played short
When we look at this although it can be successful we avoid using this in development football. To play this pass means the midfield are being bypassed and the development of the midfielders is been neglected. The options and passing patterns that can be taught from this situation are endless.
By stopping this type of pass it does become harder for the coach but the players will benefit in the long run.

The other un-coached part of this was when the ball was moved to 5 rather than playing back and switching to the weak side. Instead they forced balls down the congested side.

<br /
Above forcing the ball in a congested area

It was rare that either team successfully entered the middle third with time and space. Typically when the ball was played short a longer pass was the most popular option.
The diagram above shows that a sideways pass or a pass backwards could have exposed the weaker side of the field. Instead the ball was forced into the wide area were the opposition had good defensive positions.
Again this is difficult when the culture around the football is frantic and the game is expected to be played at one speed (as fast as possible). 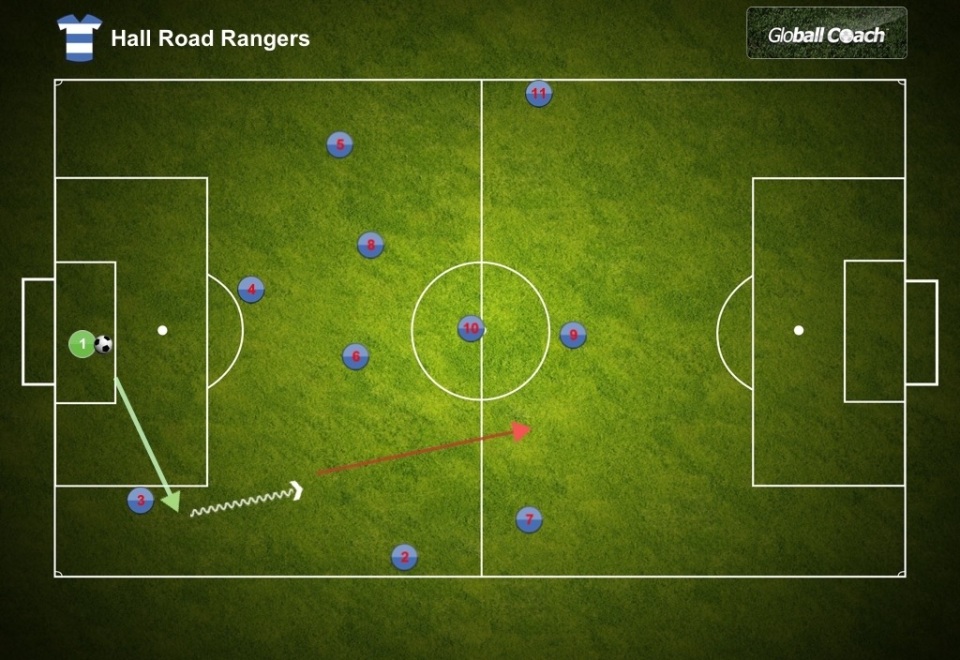 Above typical options off the Central defender

When the ball was played to the Central defenders the coaches often used the words, “take the grass.” I am guessing encouraging forward movement. The issue next was no player supported this movement and when a long pass was played it more than often was poorly executed. So unless the central defender could run through the whole team the ball was lost through him been tackled or lost due to a poorly executed forward pass.

The difference in the game was the two strikers playing up front for Hall Road Rangers. 10 was short, skillful, very quick. He ran the channels for the longer pass, looked for second balls off his strike partner and was very good turning with is back to goal. The 9 was a giant compared to the opposition, tall, strong and physically dominant. The opposition central defender struggled to see around him, had no chance due to size of winning high balls. This was typical English football, 442 direct and in the case of this game the physical match up made the game unbalanced.

Summary
Clearly a long long way to go to implement a development program with these teams. The game was frantic and lacked any real thought and imagination. I have been away from the UK for 23 years and it was just the same as when I left. I would have to question the countries ability to implement a development program. What is the national education program and are coaches of this level educated. If they are educated is this an expectable brand of football to develop English players. England may never become a country that plays total football but the balance can be improved. Watching central defenders move forward with the ball, the coach shouting take the grass with no short support, apart from an expectation they will play the channel straight in front of them.
For example improve a teams ability to move into the middle third, move into the middle third with time and space. In the game today no real understanding was present on how to achieve this regularly. It’s a simple task, CAN WE move into the middle third with time and space? CAN the team move the ball from the back third to the middle third without entering 1v1s? Which means supporting the ball carrier before the opposition move within a 3 metre radius. Now think about the tactical elements and the technical elements and gather information to build training sessions to improve this.
What is very difficult for a development coach is to impress a brand of football into this type of competition. If the opposition are physically more dominant and are pressing in the early years it makes winning very difficult. The other issue is the ego of the coach and his want to win, he basically wants to make the players successful at that level. Unfortunately the players are limited to the coaches lack of knowledge and are playing a very predictable brand of football for the higher level. This is also the case when knowledge is passed down within these levels, players and coaches will do as they have always done. They want to impress within the culture in place, which they do. Again though no new ideas are present, they just continue to stay in the same place.

At every level the game needs to implement CHANGE, it does not mean playing like Spain or Brazil but it does mean look for ways to improve the brand.